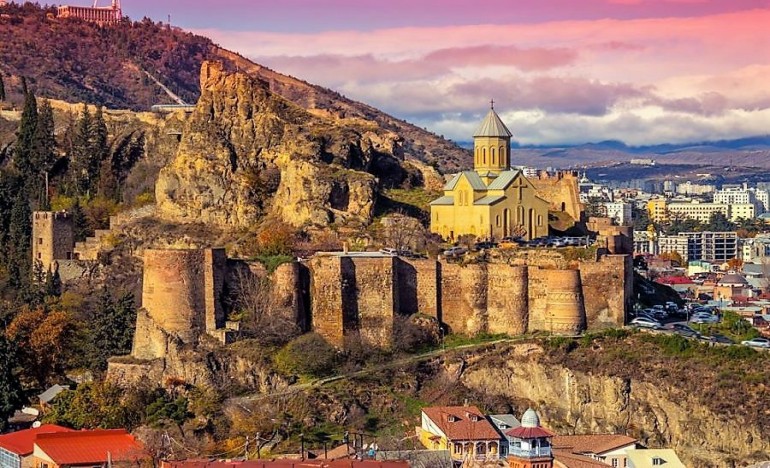 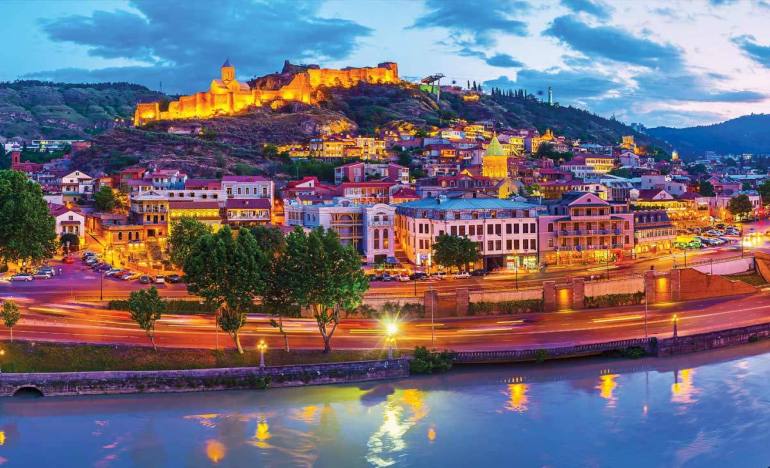 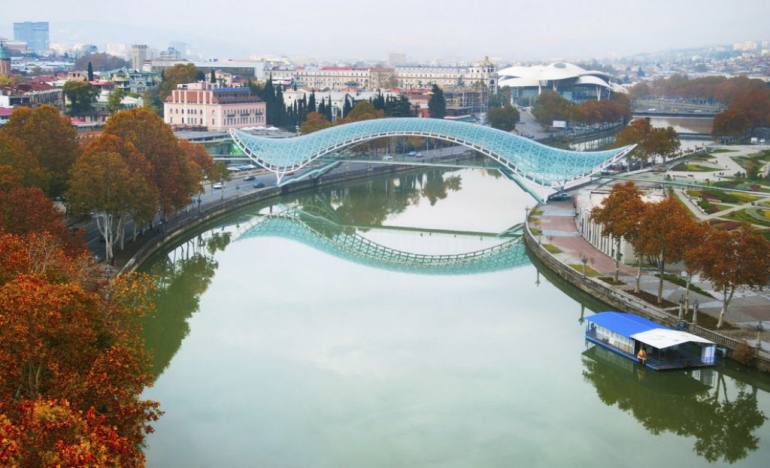 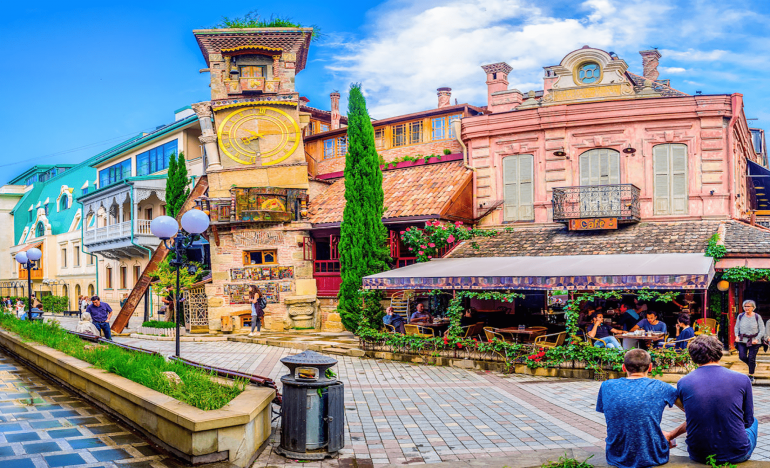 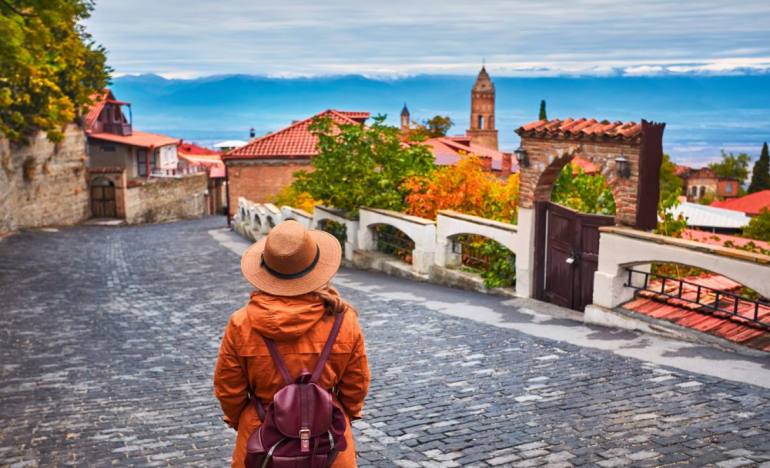 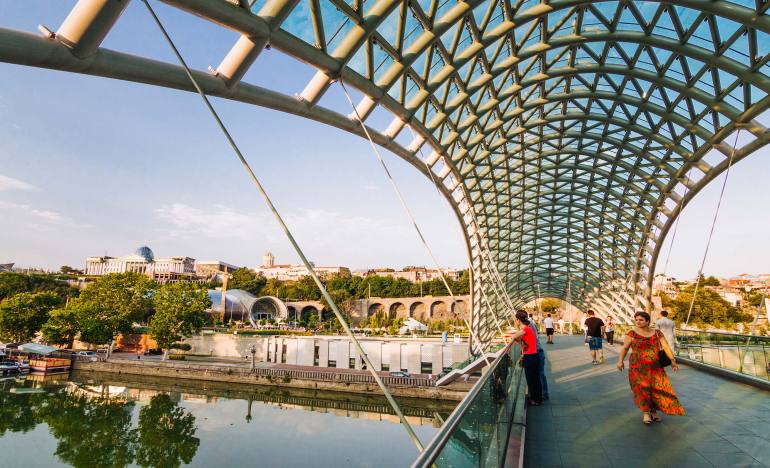 Georgia, a country at the intersection of Europe and Asia, is a former Soviet republic that’s home to Caucasus Mountain villages and Black Sea beaches. It’s famous for Vardzia, a sprawling cave monastery dating to the 12th century, and the ancient wine-growing region Kakheti. The capital, Tbilisi, is known for the diverse architecture and mazelike, cobblestone streets of its old town. Looming above Tbilisi is Narikala Castle, a reconstructed fortress founded in the 4th century and used during later Turkish and Persian occupations. The 11th-century Svetitskhoveli Cathedral is one of many notable Georgian Orthodox churches centered on the nearby town of Mtskheta. In the foothills of 5,033m-high Mount Kazbek lies the iconic, 14th-century Gergeti Trinity Church. Gergeti Glacier is a popular trekking destination farther up the mountain’s slopes. Along the Black Sea coast, the resort town Batumi has a seaside promenade and vibrant nightlife. 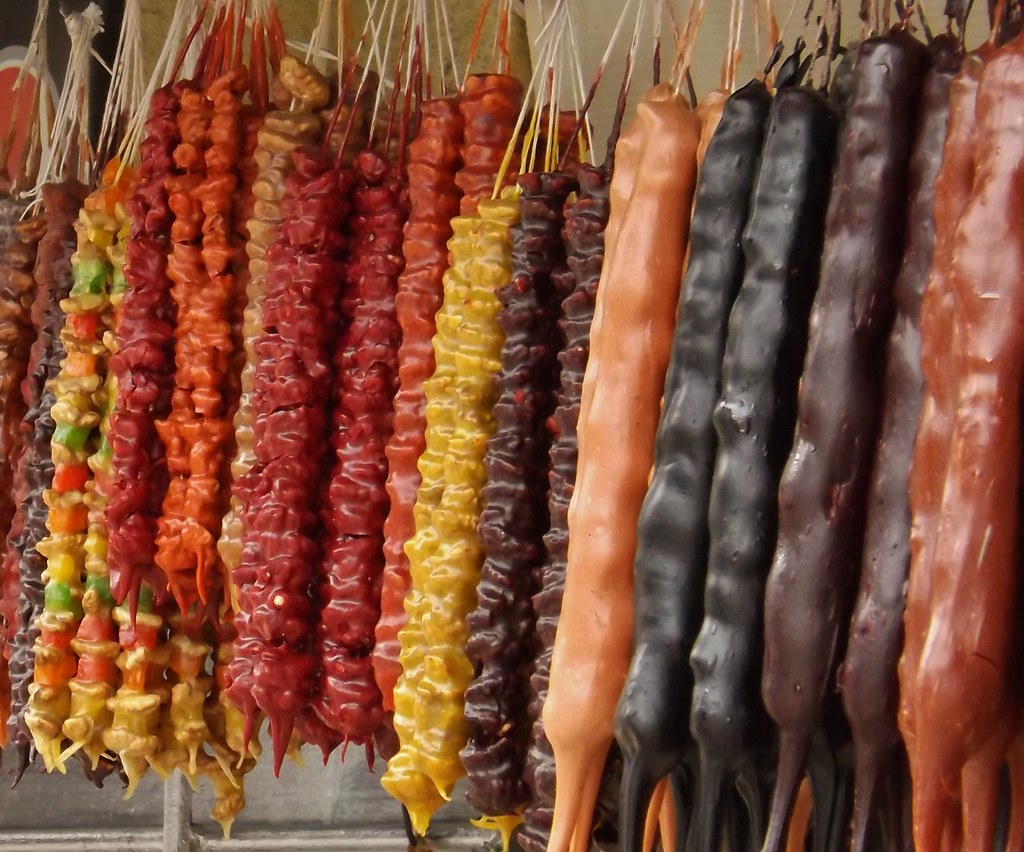 Perhaps the most eye-catching Georgian food of all, churchkhela are the lumpy, colorful confections hanging in storefront windows, which tourists often mistake for sausages. Making churchkhela takes patience and practice: Concentrated grape juice (left over from the yearly wine harvest) must be poured repeatedly over strands of walnuts. Each layer is left to dry until a chewy, waxy exterior envelops the nuts. Packed with protein and sugar, churchkhela have even gone to war alongside the Georgian military, which relied on them as a source of shelf-stable nutrition. Nowadays, churchkhela are more often served at home with postprandials and coffee, but I have a hunch that they'll be gracing American cheese boards in the near future. 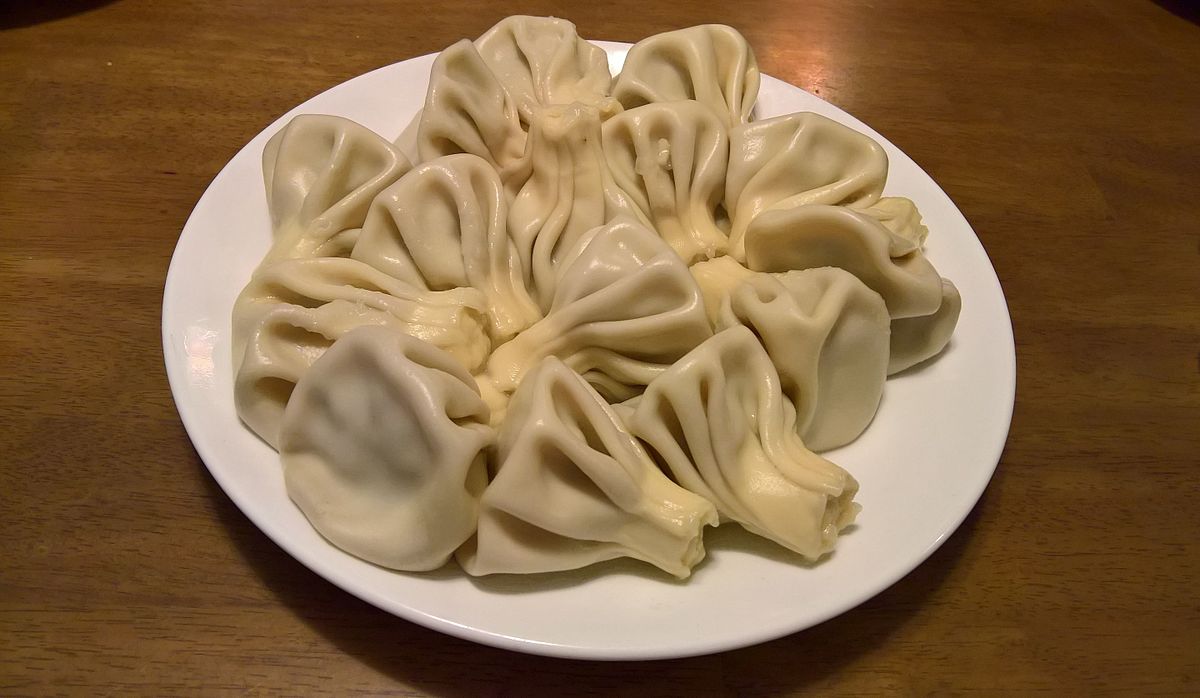 They say you can judge a good khinkali, or Georgian soup dumpling, by how many folds it has: Tradition dictates that fewer than 20 is amateurish. But when a platter of pepper-flecked khinkali hits the table, counting pleats is never anyone's first priority. Eating the khinkali is, and it requires urgency and exacting technique; without learning the latter, you risk being teased if you're in Georgian company. First and foremost, khinkali is finger food: Make a claw with your fingers and grab onto the dumpling from its topknot. Then, biting a small hole in the side, tilt your head back to slurp out the broth before sinking your teeth into the filling. Discard the topknot, take a swig or two of beer, sigh with pleasure, and repeat. Historians speculate that khinkali, which bear a striking resemblance to Central Asian manti, were first brought to the region by the Tartars, who ruled what is now Georgia and Armenia for most of the 13th century. Today, the best sakhinkles (khinkali houses) are said to be found in Pasanauri, a village 50 miles north of Tbilisi, where wild mountain herbs like summer savory and ombalo mint accent the filling. If a khinkali pilgrimage isn't in the cards, though, Khinklis Sakhli is a favorite neighborhood spot among locals in Tbilisi. 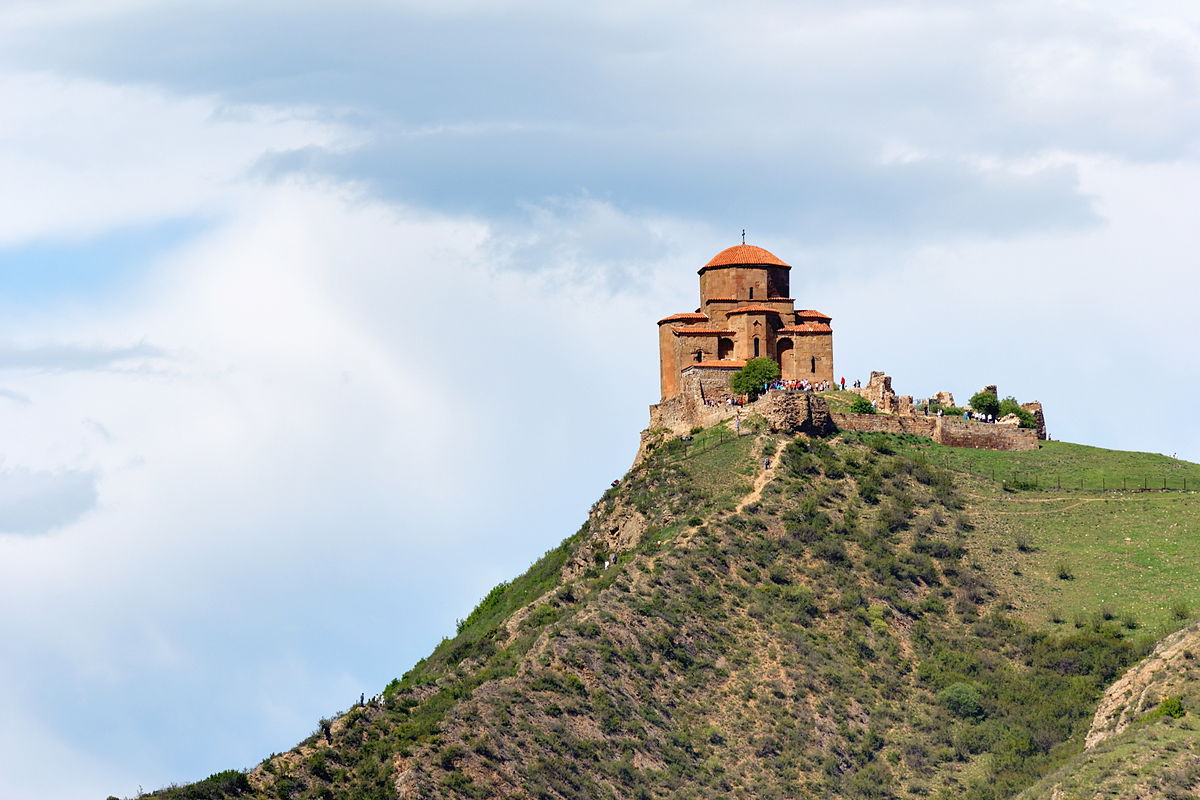 he name of this monastery translated as the "Monastery of the Cross". For the Georgian monastery in Jerusalem with the same name, see Monastery of the Cross. Jvari Monastery is a sixth century Georgian Orthodox monastery near Mtskheta, eastern Georgia. Along with other historic structures of Mtskheta, it is listed as a World Heritage site by UNESCO. Jvari Monastery stands on the rocky mountaintop at the confluence of the Mtkvari and Aragvi rivers, overlooking the town of Mtskheta, which was formerly the capital of the Kingdom of Iberia. According to traditional accounts, on this location in the early 4th century Saint Nino, a female evangelist credited with converting King Mirian III of Iberia to Christianity, erected a large wooden cross on the site of a pagan temple. The cross was reportedly able to work miracles and therefore drew pilgrims from all over the Caucasus. A small church was erected over the remnants of the wooden cross in c.545 named the "Small Church of Jvari"

ount Kazbek is a dormant stratovolcano and one of the major mountains of the Caucasus located on the border of Georgia's Kazbegi District and Russia's Republic of North Ossetia–Alania. It is the third-highest peak in Georgia (after Mount Shkhara and Janga) and the seventh-highest summit in the Caucasus Mountains. Kazbek is also the second-highest volcanic summit in the Caucasus, after Mount Elbrus. The summit lies directly to the west of the town of Stepantsminda and is the most prominent geographic feature of the area. Mount Kazbek is the highest peak of Eastern Georgia. The name in Georgian, Mqinvartsveri, translates to "Glacier Peak" or "Freezing Cold Peak". The Vainakh name Bashlam translates as "Molten Mount". 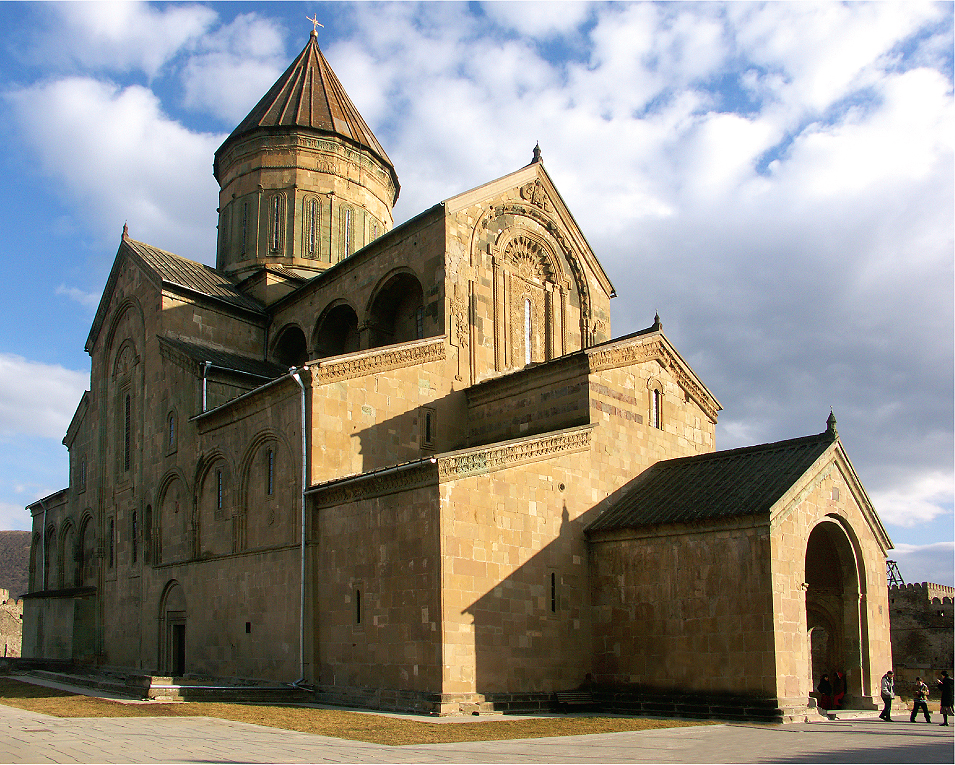 The Svetitskhoveli Cathedral ; literally the Cathedral of the Living Pillar is an Eastern Orthodox cathedral located in the historic town of Mtskheta, Georgia, to the northwest of the Georgian capital Tbilisi. A masterpiece of the Early Middle Ages, Svetitskhoveli is recognized by UNESCO as a World Heritage Site. It is currently the second largest church building in Georgia, after the Holy Trinity Cathedral. Known as the burial site of Christ's mantle, Svetitskhoveli has long been one of the principal Georgian Orthodox churches and is among the most venerated places of worship in the region. The present structure was completed in 1029 by the medieval Georgian architect Arsukisdze, although the site itself dates back to the early fourth century.